Today at my allotment I weeded around my cauliflower plants.

The plants were getting too big for the environmesh that I put over them, so I re-covered them with a bigger piece that had recently been covering my other cauliflowers, which I pulled up last week.

The same thing had happened to my curly kale, it was getting too big for the cage it was in, so I had to build a new cage for it and I covered it with some bigger netting.

I will have to remember to make the cages bigger next year.

I visited a nursery in Queniborough today with my dad.  I managed to buy some lettuce plants, which I planted in my polytunnel and some overwintering onions.  Both were £2.00 per tray which is a real bargain.

I planted the onions on my allotment, in an area where my first cauliflowers grew this year. 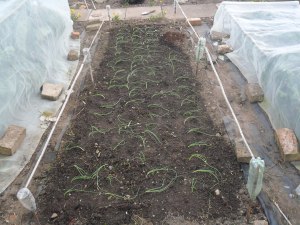 I normally buy onion sets to overwinter, but last year’s were so awful, I decided to buy overwintering onions that had been grown from seed this year.  I have read that onions grown from seed grow into stronger plants.  I don’t know if this is true but I thought I’d give it a try.

Last year’s overwintering onions failed miserably, due to the allium leaf miner.  So this year I have covered them in environmesh.

This is a pest that was only detected in Britain in 2002.  It has been spreading rapidly since and spread to many places in the Midlands for the first time last year.

The first sign is distinctive lines of white dots on the foliage.  This is where the adult fly (3mm long) has sucked the sap before it lays its eggs.

Next the white headless and legless maggots, approximately 5-8mm long, tunnel in the stems and bulbs of the plant.  I found them by cutting the bulb open.

Note:  The maggots are different to the leek moth.  The leek moth is white with a brown head and small legs.

Plants affected by the allium leaf miner tend to rot, from the damage it has caused on the plant.  If you look closely you may see the small brown pupae, 3-4 mm long, embedded in the stem or bulb.

The pupae overwinters in the plant or in the soil.

In the spring, the adults emerging from the pupae, lay eggs at the base of the allium stems. The first generation of larvae feed in April and May. The second generation is likely to feed in mid-September.

Cover with fleece or environmesh when the adult flies are active (March – April and September – November).

Make sure you rotate your crops as the pupae may emerge as adult flies underneath your fleece if you keep your onions in the same place.

For tea tonight we had a nice homemade pizza for a treat.

Pizza is very cheap and easy to make and tastes as nice as the well known ‘Hut’ that can be found in every town.

The best bit about it, is you can tailor each pizza to each persons individual taste if you want.  For example, tonight my pizza had green peppers on, my eldest daughters had ham and leftover roast beef on, my husbands had ham on and my youngest daughter had a pizza made with dairy free cheese (due to her dairy / lactose intolerance).  It really was quite easy to do.

I make the dough for the base in my bread maker, but the same ingredients can quite easily be mixed in a bowl and kneaded for 10 minutes and then left to prove.

A little bit of olive oil

Mix the dough by hand or with a breadmaker.

Roll the dough either into a large pizza base or smaller bases.

Put on a greased baking sheet or pizza pan.

Brush some olive oil over the pizza base or bases.

Spread a pizza sauce over the base.  You can find my pizza sauce recipe here (it’s the same recipe as pasta sauce).

Top with whatever you choose and then mozzerella cheese, either grated or sliced.

Sprinkle with basil and organo to give it an italian pizza taste.

Tonight, I served the pizza’s with a jacket potato and a nice homegrown salad.

Thank you for reading my blog tonight.

5 thoughts on “The Allium Leaf Miner and Homemade Pizza”