It’s been a strange week at the allotment as there has been some lovely ‘highs’ and one massive ‘low’ which I’ll tell you about in a minute.

The highs first…..The produce is coming thick and fast and I am picking peas, podding them and blanching them as soon as possible (and I’ve still not managed the one hour turn around that ‘Birds Eye’ do, lol)….but they still taste delicious!…together with the mange tout that my husband and youngest daughter fight over when I cook them for dinner. 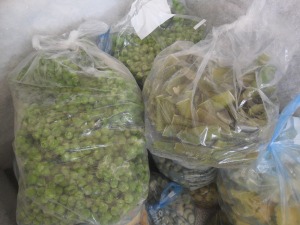 I’m picking salads crops almost daily now and I can honestly say they taste far better than supermarket salads, that don’t seem to have any taste. 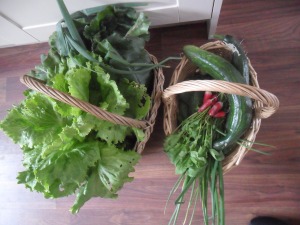 The cucumber in the photo is from a spare plant that I put in my polytunnel at the allotment and it has been producing cucmbers for about a month now.  The plant was grown at exactly the same time as the other three plants that I have in my greenhouse at home, but this plant is far further forward than the others.

It could be that this plant was planted into the ground in my polytunnel (the greenhouse plants are in pots), or it could be I have shading over my greenhouse at home which has slowed the growth?….I will probably never know. 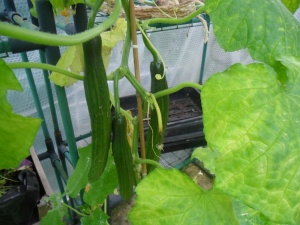 This week I picked my first beetroot and boiled it for a salad tea.  It was so sweet!

These are the beetroot that I sowed in newspaper pots back on the 8th April and transplanted to my allotment a few weeks ago.  I have read that beetroot dosen’t like to be transplanted, but by growing it in newspaper pots there is no root disturbance and they can be sown earlier, before the ground has warmed up.

I’ve also been picking my first gherkins from my polytunnel.  This year I haven’t grown so many as I find that they don’t last too long when you pickle them.  So I have only grown enough for a few jars over summer.

I pickled my first crop this week.  It’s really easy to pickle gherkins and I wrote how to do it here if anyone is interested.

Gherkins that I pickled this week

One thing I did at the allotment this week (with Mr Thrift’s help) was to start a new compost area.  I have a problem with rats in my compost bins over winter, so I decided to put my bins on slabs to see if this may help.  We laid some spare slabs in the utility area and I will start to gradually move my dalek compost bins over each time I empty one.

These bins are where I put my peelings, etc. 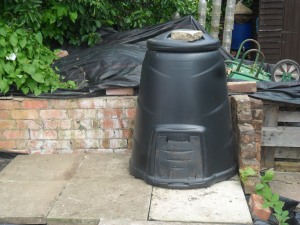 And now for this weeks allotment ‘low’…..my potatoes have succumbed to the dreaded ‘blight’!

I didn’t spot it at first and dug up my first potatoes of the year (which incidently were mouth wateringly delicious):

These are my second early potatoes called ‘Marfona’.  As you can see they are still quite small, as these actually grow much bigger and can be used as baking potatoes.

…..But then I spotted the tell tale signs of blight!

First I spotted the marks on the leaves: 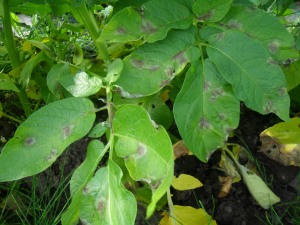 And when I looked underneath I found a couple of stems where it had spread:

There was no doubt about it….it was blight.

I always find potato growing such hard work and it is so disappointing when this happens!

Blight is a wind blown fungus that can travel long distances.  It spreads when the temperature is above 10C and the humidity is above 75% for two consecutive days, known as a ‘Smith Period’.   In the UK outbreaks can occur from June onwards and apparently it is usually seen in the south west first.

The early stages of blight can be easily missed and not all plants are affected at the same time, however it will spread rapidly.

Symptoms usually seen are brown patches that appear on the leaves and stems and spread very rapidly.

I noticed that the blight had only spread over half of my ‘picasso’ potatoes (early main crop) and half of my ‘marfona’ potato crop (2nd early), but I know it spreads really quickly.

If you catch blight early enough you can stop the fungus from going down into the potatoes by cutting off all the foliage, so none of it is above the soil and then leaving the potatoes underground for at least two weeks without digging them up (so hopefully they are protected).

So this is what I did.

Unfortuanately, my potatoes won’t grow any bigger now, but I will be happy with the potatoes I have if this saves them.

Incidentally, you CAN put the blighted top growth in your compost as blight can not live on dead plant material….but it will survive in the seed (i.e.potato) which is another reason to use fresh seed potatoes each year and dig up any ‘volunteers’ that grow around your plot.

I noticed that my ‘desiree’ potatoes and tomatoes that are growing in a different patch have not yet been affected, so I will be monitoring them very, very closely.

One thing I am wondering, is when I used the ‘Nemaslug’ (nemotodes) for the first time last month as a trial, I had to keep the soil moist for two weeks (which I wasn’t happy about at the time as it was a lot of work).  I wonder if all my watering increased the chance of blight as the leaves were continually wetted for two weeks?….I suppose I will never know.

At home this week….

I cleaned three old photo frames using bi-carb, water and an old toothbrush.  And they came up lovely.

I also sowed up a hole in my old ‘comfy’ trousers, which will keep them going a bit longer.

And I decided to make some pitta bread at the weekend to go with my homemade houmous.

So it has been a good frugal week.

I realised I haven’t shared my pitta bread recipe with you before.  I use my breadmaker to knead the dough, but you can just as easily knead it yourself.

I hope this easy recipe will help someone out there:

Divide the dough into 12 equal pieces and roll each piece into a rough ball.

On a floured board, use a rolling pin to make oval shapes approx. 4″ x 8″

Put them on a greased baking sheet.

Put in the oven for 5 mins and then turn them over and for a further 5 mins until they are cooked.

Wrap them in a tea towel to keep them soft and warm if you aren’t quite ready to eat them.

I will be back next Friday at my usual time.