Usually January has the coldest temperatures of the year, however the month is nearly over and apart from last weeks cold snap, it has been a mild month.  Surprisingly my first daffodil is flowering in my garden: 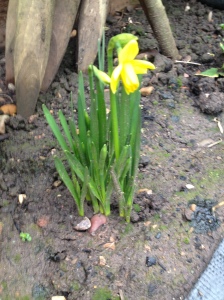 The snow drops that I brought back from my allotment last January are beginning to also bloom in my garden:

I am so glad they survived the move as they remind me of my good friend that passed away three years ago in February…..when there were snowdrops flowering everywhere.  Also on the day of her funeral as we walked out of the cemetery, all of a sudden snow fell from the sky and it looked beautiful.

Snowdrops will always remind me of my friend and I hope to plant more again this year in my garden, together with the ‘for-get-me-nots’, which seem a complementary match.

On the park when I walk Judy, I have noticed that as well as snowdrops flowering there are purple and yellow crocus too: 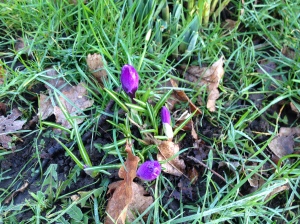 Yesterday morning as I walked around the park it felt very spring-like, as the birds were singing beautifully and the sky was lovely and blue.

I have also noticed that daylight is lengthening slightly every day and on fine days it is getting dark a little bit later and lighter a little earlier, which always makes me feel better.

January is usually such a dark and gloomy month, but time seems to have past by very quickly this month and it is nearly February already……is this my age?….or have I just been busier than normal?

Unfortunately I have been poorly this week with fluid on my ear and sinusitis and I haven’t felt my usual self.  The doctor gave me some antibiotics and I am on the mend now, though I am more tired than usual.

However, on the moments that I have felt ok I have managed to get into the garden.

Last weekend Mr Thrift helped me to clear my greenhouse and give it a good wash as the windows were filthy.  I used ‘Citrox’ which is disinfectant based on extracts of citrus fruit.  It says it is safe to use around children and pets, which is what attracted me to it.

It washed well and didn’t smell like other disinfectants that I have used in the past: 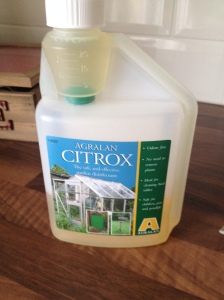 After removing the screening that I had left up since summer, we realised that we had a problem with the our neighbours lilac tree and ivy.  They were growing against the greenhouse glass and the ivy was pushing between the panes of glass, which we thought would eventually damage the greenhouse:

So we spent a whole morning cutting back the lilac tree and removing the ivy, using my long handled pruners and loppers.  Myself and Mr Thrift were too ‘big’ to fit down the back of the greenhouse to remove the ivy, so my youngest daughter (who is very thin) did this for me….and she did a grand job!

I am going to have to make this an annual job now, so it doesn’t get this bad again.

Afterwards I bought some new greenhouse bubble wrap, as I removed the old bubble wrap last Spring as it really had seen better days. 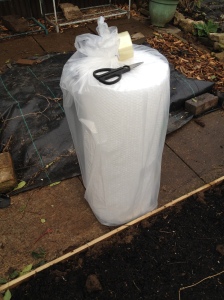 The next day I put the bubble wrap up, but unfortunately I need to buy a tiny bit more for the door, as I ran out: 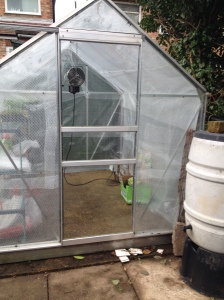 I also checked my greenhouse heater still works ok, ready for when I need it.

I don’t heat my greenhouse until all my windowsills are full inside my house, as even though my heater is electric and is thermastatically controlled, it is still expensive to run.

Unfortunately I think I did a bit too much too soon and after sorting my greenhouse out I went downhill and slept for nearly 24 hours!

However in the middle of the week when I started to feel a bit better I decided to dig up my kale (and was told off afterwards by Mr Thrift for doing too much again before I was better).

The recent winds had blown my kale over, but there wasn’t much of it left anyway.

I picked the remaining kale and the two remaining red cabbages and cleared away the net.  The area looks much better and you can now see the daffodil in flower at the back too: 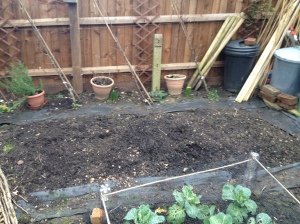 Some of the outer leaves of the cabbages were a bit rotten, but once I removed these there was lots of cabbage inside that was fine: 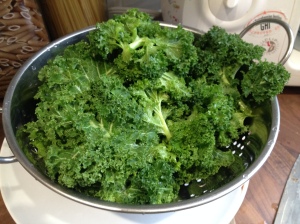 Both the kale and the cabbages tasted lovely and I even added some of them to the large pot of spaghetti bolognaise I made this week to pad it out:

So this week has been rather quiet as I have been poorly.  However one final thing I did manage to do was to start some cress seed off.

I love cress as it reminds me of when I was a child as I used grow it then, as it was so easy and it grew quickly.

“To grow cress, just shake a few seeds on a damp tissue and leave it in a dark place until it germinates and then move it to a windowsill to continue to grow, until it’s about an inch high.  Make sure the tissue is remains damp at all times”.

Cress is nice in sandwiches and in salads and it is something that people forget about.

Hopefully I will be fighting fit again next week.

So thank you for reading my short blog today and I will be back next Friday as usual.

The funeral was beautiful and so so sad.  There must have been about two hundred people there, which showed how well she was thought of by everyone.

When we came out of the funeral, it snowed really heavily, it was so pretty and I know she would have loved it.  I will remember my friend each time it snows now.

The day after she died, I noticed lots of snowdrops were in flower, as I went for a walk with my husband.  So I have decided to plant lots of snowdrops this year in my new woodland patch at my allotment, as a way to remember my friend. 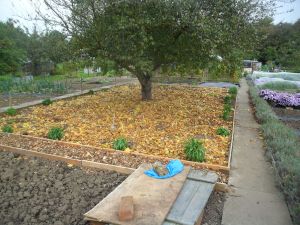 Eastbourne was lovely, as usual.  It was rainy and wet when we arrived and the wind was blowing a gale, but this soon passed and we had a couple of beautiful days where the sun shone.

We stayed in the Travelodge that is just across the road from the sea and yet again we only paid £31 per night for bed and breakfast for a family of four.

You can read about the Travelodge, room and breakfast on a post I wrote here.

We visited Beachy Head and the Birling Gap and looked at the wonderful views.  My daughter took the following pictures: 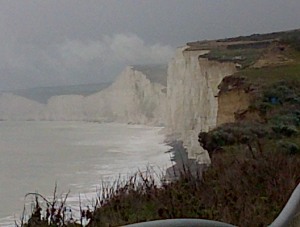 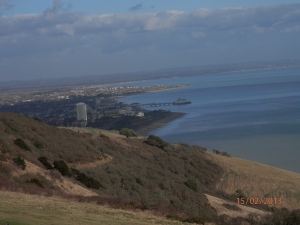 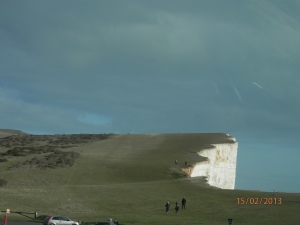 We had a lovely, peaceful holiday.

While we were there it was my eldest daughter’s birthday.  I can’t believe she is 15 years old!

A ‘One Direction’ Cake:

First I made three sponge layers, using the easy sponge cake recipe here, and sandwiched them together using a nice homemade Strawberry Jam.

I then made up some butter icing, with a tiny bit of yellow sugar paste (my daughter’s favourite colour).  You can see how to make the buttercream here.

I spread it all over the cake using a warm knife:

Then the fun began.  A couple of weeks before, I purchased a ‘One Direction Edible Cake Topper’ from EBay for just under £5.00.  It was so easy to use,  I just put it in my freezer for a few moments and it peeled off the backing easily and then I gently pressed it onto my cake:

I added a homemade ‘One Direction’ ribbon, using card that I covered in sticky backed plastic and piped the remaining buttercream around the edges: 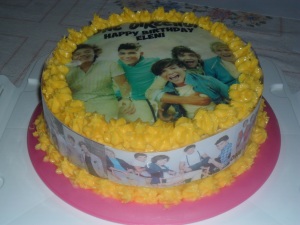 My daughter loved the cake especially as the cake had her name on.  My homemade cake was bigger than the Tesco version you can buy for £8 and I made it ‘dairyfree’ so all my family could enjoy it.   I would like to bet that a homemade cake tasted better too. 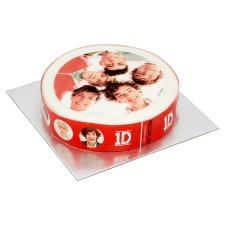 A Tesco ‘One Direction’ Cake

We couldn’t put candles on the cake, as it would have set off the smoke alarms at the Travelodge, but we sang ‘Happy Birthday’ to my daughter and the staff who were working that evening joined in too and also shared the cake with us.

I will be back again on Friday.