Why do we celebrate Halloween?

Halloween originated back in the 5th century BC.  The Celts celebrated the end of summer and the gathering in of the harvest with a festival called ‘Samhain’, which took place on the night of 31 October.  It was believed that on this night the boundaries between the living and the dead became blurred, and that the ghosts of the dead returned to earth in search of living bodies to possess for the following year.

A large part of the celebration involved the building of huge bonfires, which were thought to welcome friendly spirits and ancestors, but ward off those considered dangerous. People would dress up in animal heads and skins and noisily parade around the neighborhood, being as destructive as possible in order to frighten away spirits looking for bodies to possess.

The name ‘Halloween’ came from All Saints Day on 1 November, named by Pope Boniface IV in the seventh century.  It was a day given in honour of saints and martyrs. It is believed that it was the Pope’s attempt to replace the Celtic festival of the dead with a related, but church-sanctioned holiday. The celebration was also called All-hallows, All-hallows Eve and, eventually, Halloween.

The custom of trick-or-treating is thought to have originated from a ninth-century European custom called ‘souling’. On November 2 (All Souls Day), Christians would walk from village to village begging for ‘soul cakes’, made out of square pieces of bread with currants.  The more soul cakes the beggars would receive, the more prayers they would promise to say on behalf of the dead relatives of the donors.  At the time, it was believed that the dead remained in limbo for a time after death, and that prayer, even by strangers, could help a soul’s passage to heaven.

Now a days, children go trick-or-treating, which means dressing up and knocking at doors shouting “trick or treat”.  If you do not give a treat then the children will play a trick on you.  In actual fact, in England, it’s polite for children to only knock on a door that obviously welcomes ‘trick or treaters’.

About 99% of pumpkins marketed domestically are  ‘Jack O’Lanterns’ used at Halloween.

In the United States, 86% of Americans decorate their homes for Halloween.

Magician Harry Houdini died in 1926 on the 31st October.

The record for the fastest pumpkin carver in the world is held by Jerry Ayers of Baltimore, Ohio. He carved a pumpkin in just 37 seconds!

People have believed for centuries that light keeps away ghosts and ghouls. Making a pumpkin lantern with a candle inside may keep you safe from all the spooky spirits flying around on Halloween.

The record for the heaviest pumpkin grown is 2009 lbs.!  You can see the pumpkin here.

Thanks to Mrs Yub, one of my regular readers, I have a link here to a website that shows some wonderful carved pumpkins.  Some of them are absolutely brilliant.

Now I’ll continue with my ‘Pumpkin Recipe Week’, so you can use up the pumpkin flesh that you scoop out of your halloween pumpkins.  Don’t forget you can put your chopped up pumpkin flesh straight into a freezer bag (without blanching) and put it into your freezer, to use at a later date.

Heat the olive oil in a large pan and then slowly fry the onion and potato until they are nearly soft.

Add the garlic and pumpkin and continue frying for 1 minute.

Add all the other ingredients and bring them to the boil.

Simmer for approximately 25-30 minutes until the ingredients are soft.

Blend the soup in a liquidiser or by using a stick blender.

Bring the soup back to the boil and serve with some nice homemade bread.

I freeze this soup in one bowl portions, which I defrost and reheat. I take it in a flask to the allotment and it’s very warming on a cold autumn day. 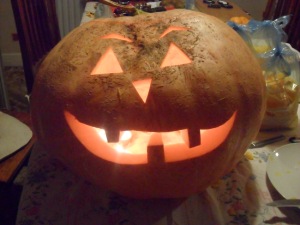