Well I can only say that Monday night was amazing for Leicester, which is where I live ….. Mark Selby from Leicester, won his second World Snooker Championship and Spurs and Chelsea drew 2-2, which meant that Leicester City Football club were now ‘CHAMPIONS OF THE PREMIER LEAGUE’ (I never thought I would write that sentence on my blog).

My family are big Leicester city supporters and Mr Thrift and my brother-in-law take my 85 year old dad and stepmum to all the home matches.  I also used to be a season ticket holder before our girls were born, in fact I still went to watch them when I was heavily pregant and I couldn’t fit through the turnstyles any longer and had to use the disabled entrance!

So early the next day we decorated the windows of our house with flags and posters.

The BBC news reported that on Monday evening the streets of Leicester were full of fans celebrating and from the minute the whistle blew to confirm LCFC were champions, I could hear people shouting “champions” and cars ‘hooting their horns’ into the early hours of the morning.

Myself and Mr Thift went down to the stadium the next day and there were still hundreds of people there celebrating, together with numerous TV cameras from around the world:

We also met a ‘Vardy’ look-alike and had blue ice creams while we were there. 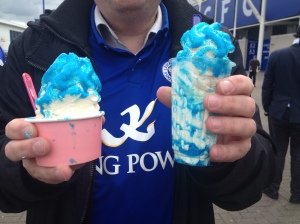 The atmosphere in Leicester at the moment is amazing (especially as this is all so soon after discovering Richard III underneath a Leicester city car park last year).

We are a multicultural city and every race and religion are celebrating together, as we are all so very proud to live in our city!

In my garden this week:

The weather has gone from snow and hail showers to beautiful warm days and the Spring flowers are still looking stunning in my garden: 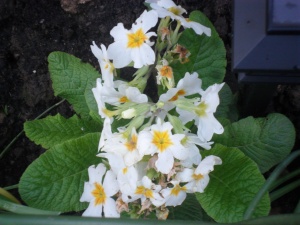 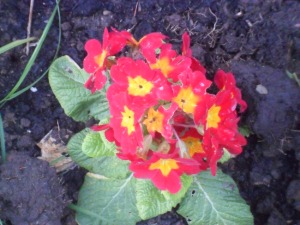 I started the week by planting some spring onions around my tomato plants in my greenhouse.  I am determined to use every single space in my garden possible to grow as many things as I can.

I started the spring onions in modules a few weeks ago as I find they germinate and grow better this way.  I put a pinch of seed in each module, but I don’t thin the seeds out as the onions will grow happily together and when I harvest them I pull up a ‘bunch’ at a time:

I also planted three more tomato plants in the greenhouse and sowed some radish in between them.  I added some marigolds that I had grown from seed, (marigolds emit a strong odour that repels greenfly and blackfly and they will also add colour to my greenhouse): 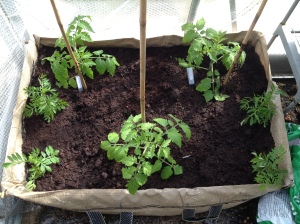 I continued to plant peas this week.  I planted the rest of my climbing peas against our outhouse wall:

And some dwarf peas in the new area of my garden that I created last autumn: 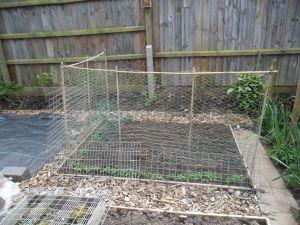 Also I found a small, empty spot that I had forgotten about, so I planted the remainder of my sweet peas here in a pot.  I will be dotting flowers all around my garden in the next few weeks, to attract as many beneficial insects as possible: 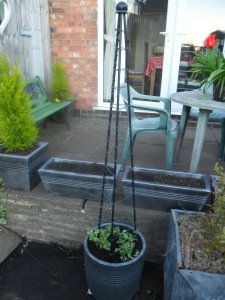 I have repotted my tegetes, antirrhinums, marigolds, thyme, chervil, dill, sage, oregano and my remaining greenhouse tomatoes.  I have grown all of these plants from seed, which I think has saved me a lot of money over all and I also enjoy growing things from seed too.

As I was potting my tomato plants up I noticed that there were side shoots growing on the plants, so I ‘nipped’ them off using my finger and thumb.  You can tell which the side shoots are, as they always grow between the main stem and a leaf:

I will be continually ‘nipping’ off the side shoots on all my tomatoes as they grow, as these sideshoots are unproductive and take energy from the main plant.

I also sowed some more seeds again this week…..I started with some mangetout as my youngest daughter and Mr Thrift LOVE these fried in a bit of butter.  Again, I used guttering to sow them into and I will keep them in my mini greenhouse until they germinate, as I seem to get a better germination rate this way:

All of these seeds are sitting inside our kitchen waiting to germinate, as unfortunately my greenhouse is bursting at the seams now as you can see below: 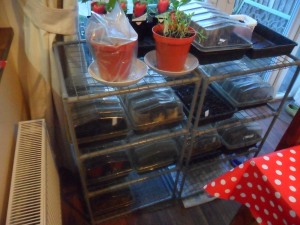 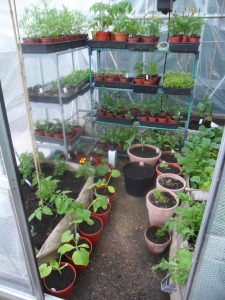 The last gardening job I did this week was to cover up the gravel board that broke when our fence blew down in November last year in front of our grass.  Unfortunately when our kind neighbour fixed the fence for us, he left this board broken (I’m not sure why but I guess it would have been too hard to replace it).

As the broken board was bowed I couldn’t just put a new gravel board in front of the broken one, so I brought a log roll to cover it up and I think it has done it’s job well:

In the home this week:

At home this week I have brought back one of my old routines of baking bread rolls at the weekends for the week ahead:

I then made some garlic bread for tea with the rolls I baked and my stored garlic.  I also made some extra to freeze for another time.  I made the garlic butter and spread it onto the rolls and then froze the rolls.  When I need garlic bread for tea, I will take out the frozen rolls that I need and cook them in foil in a pre-heated oven for 15 minutes, gas 6 / 200C / 400F. 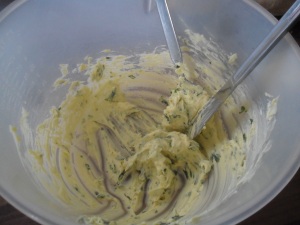 I made a big batch of blackberry cordial as well (as my youngest daughter loves it and has been asking me to make it for months).  As my daughter is the only one that drinks it, I separated it into small usuable quanties and put it into the freezer, so I can take it out when I need it and then dilute it with water – this way it won’t get wasted:

And finally I made some little fairy cakes with sultana’s – some to eat and some to freeze for another time:

This week we have been having some lovely salads, using lettuce leaves and radishes from my greenhouse and chives from the garden: 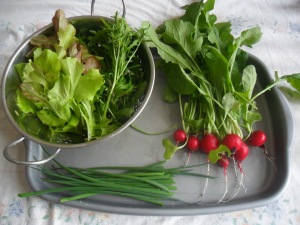 As I am being more organised I remembered to add defrosted sweetcorn and beetroot that I grew last year and froze.  I still have lots left in my freezer, so I must keep using it: 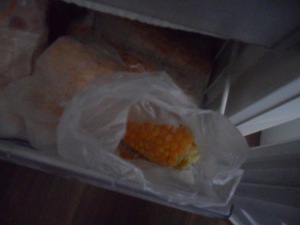 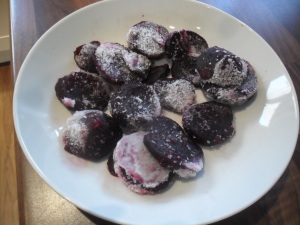 And finally I added coriander that I have been growing on my kitchen windowsill:

And the salads have been tasting wonderful:

This week I also starting picking a bit of rhubarb and stewing it for my breakfast.  I’ve added it to porridge, sultana’s and greek yoghurt and it really tasted nice: 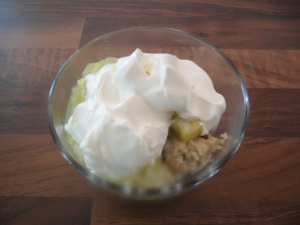 Incidently, a lot of people think you can’t compost rhubarb leaves as they are poisonous….but you CAN compost them, as after a few months in your compost heap, the toxin level will have dropped so low that it won’t pose a threat: 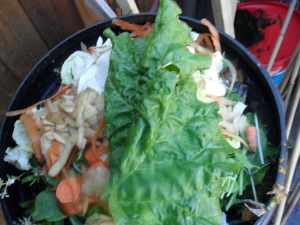 During the last week:

My sister had a cake stand with dairy free goodies (as she is dairy intolerant) and my mum and I shared the one in the photograph below.  There was so much that they wrapped up the chocolate cakes so we could take them home…..it was delicious! 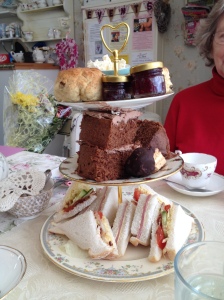 Finally this week I took some plants to my nephew and his family to help him out, as he has made some deep raised beds and a coldframe out of wood for his garden.  He had done a really grand job on them and they look great.  He is in the process of growing his vegetables from seed and hopefully, my adoreable great nephews will get the gardening bug too: 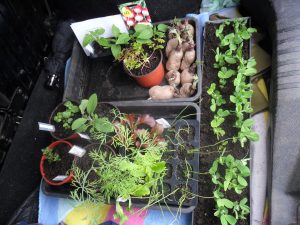 I have had some lovely times this week and to round it off, yesterday as I walked my dog in Bradgate Park I heard a ‘Cockoo’ for the first time in my life (they are quite rare birds now).  Recently I also heard a woodpecker in our local park for the first time too….so Judy is bringing more unexpected delights into my life everyday and I am so glad we adopted her from the RSPCA.

Judy with her LCFC football shirt on

Well that’s it for this week.  I will be back next Friday as usual.

Have a great week!