Before I start today I wanted to remind anyone that is interested, that my usual monthly blog post of

‘What To Do In The Kitchen Garden In July’ can be found here.

There is loads of information in this post e.g. weather conditions expected, what to sow / plant / harvest in July, jobs to do and pests / diseases that you may encounter this month.

I hope it helps someone out there.

In My Kitchen Garden This Week:

This week I planted my leeks in a space where my lettuce and radishes stood last month.

I raked in some blood, fish and bone and I also top dressed the soil with compost as I am growing a second crop so quickly after a previous one.

I then used my old wooden ‘dibber’ to make holes six inches deep into the soil: 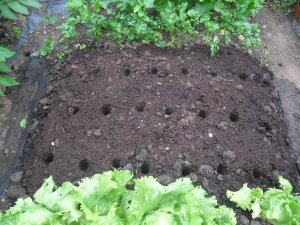 Then I cut the ends of the roots off each leek.

Previously it was thought that cutting the roots and the top off the leeks would stimulate the roots into growth…. I have read since that it doesn’t really make a difference.  I still cut the roots, as it makes it much easier to push each leek into it’s planting holes.

I then pushed each leek into the hole I made with the dibber (sometimes it’s easier to twist the leek to get the roots to go down into the hole) and then I just watered each leek.

(You don’t need to back fill the hole with soil, as the water will settle the soil around the roots). 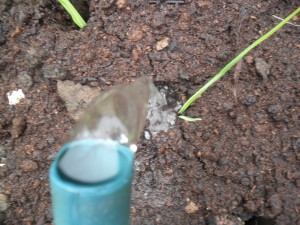 This week in my kitchen garden I also planted the spring onions I sowed last month.  I am running out of room now and so I decided to use the space in between my fruit bushes (as their roots are still fairly small): 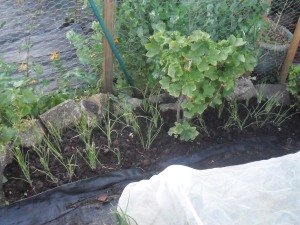 I also sowed some more lettuce seeds in a very small space, again between my fruit bushes.  The weather has been so dry I watered the drill before I sowed the seed and then just pulled the dry earth back over the seeds.  This stops something called ‘capping’ which happens on a heavy clay soil.  It is when the wet soil on top of the seeds forms a hard ‘crust’ that the seed can not break through as it grows. 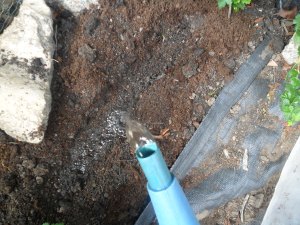 Another job I did was to cut my chives down, now that the flowers (that the bees so loved) have gone over.  This way I will hopefully get another crop of fresh new growth soon: 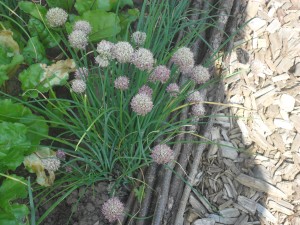 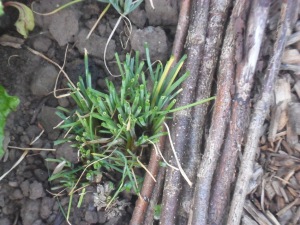 I also put some canes into the ground to support my Jeruselum artichokes, as they have a tendancy to fall over.  I also tied some string to the canes as well: 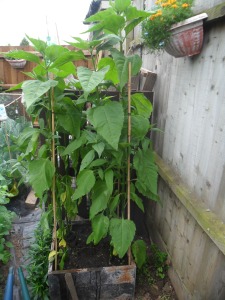 The comfrey that I transplanted from the allotment has done really well and this week it is ready to cut down and use.

I chopped it up and put it in a pot, weighed it down with a brick and then just covered the comfrey with water: 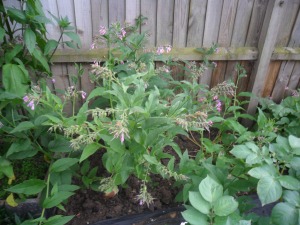 I then put a lid on the pot to stop flies getting into it and I will now leave it for a couple of weeks.

Comfrey feed is a high potash feed, so it is great to use once a week on all fruit and flowering plants.  You can read more about it here. 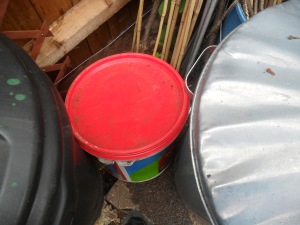 To finish off the week I painted my second bench, to match the one I did last week and it’s come up well too.  I also had a general tidy up, putting all my seed trays and pots away: 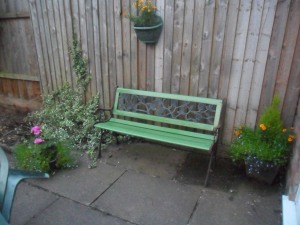 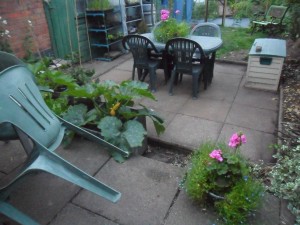 Finally, in my kitchen garden this week I noticed that my nastursiums are flowering.  These were found growing in my strawberry patch, so I transplanted them to each end of my runnerbeans.  I love nasturtiums as you can eat the leaves and flowers in salads, but they are also extremely good at attracting blackflies away from my runnerbeans, so I always plant them together:

At home this week:

This week I ran out of my kitchen surface cleaner so I made some more.

I use just white distilled vinegar and a few drops of tea tree essential oil.

White vinegar is a great mulitipurpose cleaner and if you add a few drops of Tea Tree oil it then becomes a multipurpose antibacterial cleaner, which is great to use around your kitchen.

You can read all about the wonders of using vinegar for ‘old fashioned’ cleaning here.

I also decided to rejuvenate our bath towels and flannels as they were looking a bit old, as we have had them quite a while.  There wasn’t really anything wrong with them except they were all different colours and faded….so I brought a washing machine dye and here is the results: 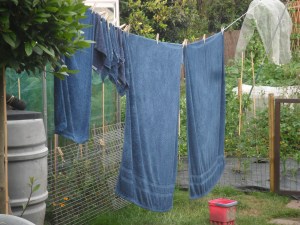 I was so pleased with them I decided to also buy a dye for my T-shirts that were also faded (but still had lots of wear left in them).  I dyed eight T-shirts all in all and you can see the before and after photo’s here: 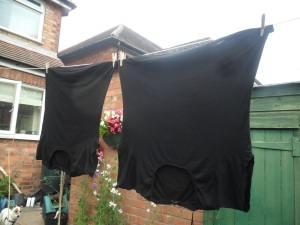 I was very pleased with them and now I don’t need any new T-shirts for this summer.

This week at home I also cleaned the black mould from the PVC on our bay window: 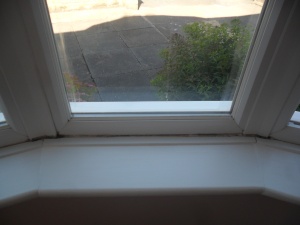 The only way I have ever managed to remove the mould is to use a mixture of bicarb and bleach (which I know isn’t an old fashioned method, but it works).  I have tried using lemon juice in the past but it isn’t quite as good.

I simply put some bicarb in an old tub and mix bleach in until it is a thick mixture (not runny) and then I use an old toothbush to thickly plaster it on the mould: 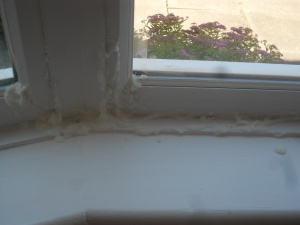 I leave it for an hour or two and then wash it away using rubber gloves on my hands and this is the result: 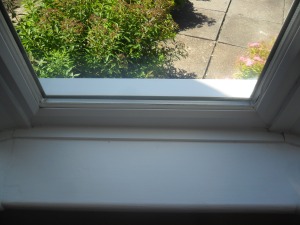 IF YOU DO THIS YOURSELF ALWAYS TEST A SMALL AREA FIRST TO MAKE SURE YOUR PVC ISN’T DAMAGED IN ANY WAY.

If you remember last week we had the plasterers in to ‘skim’ the walls in our front room and ‘patch up’ our ceiling.  They did a great job on our walls but the ceiling was awful, so I spent a whole afternoon sanding it down! 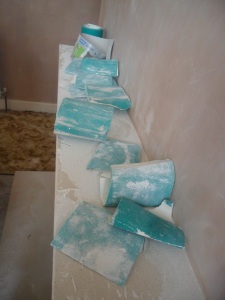 I then painted the ceiling, walls and woodwork and then I hung some wall paper on the chimney breast wall.

I love painting, but I’ve only wallpapered the odd easy wall over the years, but I thought I would give it a go.  I watched lots of ‘you tube video’s’ but still I found some of it very tricky (especially around the fireplace).  But I managed it and we think it looks nice and it has saved us paying out for a decorator. 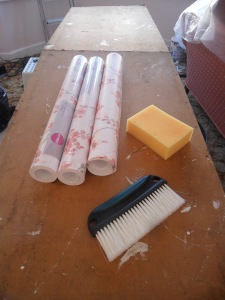 This room has desparately needed decorating for a long time.  We chose the colour of the wallpaper to go with our ‘charity shop’ three piece suite and we are really pleased with how the room looks now.  We just need a new carpet to finish the room:

This week I have been writing my blog for three years and I wanted to say a big thank you for your continued support.  I originally only planned to write my blog for one year, but I have had so many lovely comments over the last three years that spurred me on to continue to write.

Thank you so much for reading my blog posts.

I will be back again next Friday as usual.