Last weekend the weather was very strange and Linda Darby left a comment on my blog to say they had even had snow in Derbyshire.  Snow isn’t unheard of in April, but it is unusual.

Here in Leicester we had hail stones.  Unfortunately at the time myself and Mr Thrift were mulching around my mother-in-laws roses with greenwaste compost, so we had to stop what we were doing and wait for it to pass:

Incidentally as there were lots of annual weed seeds germinating in the beds, I laid sheets of newspaper between the roses and put the mulch on top…..this will kill the small annual weed seedlings without having to pull them all up, so it saved alot of time:

This week I went for the monthly dog walk in Bradgate park with our trainer Steven Havers.  Unfortunately this is the last walk in Bradgate Park as the walk is being relocated to Switherland Woods next month.

The Bradgate Park Trust reported this week they have now brought in a new sets of rules regarding dogs in the park, because people have been acting irresponsibly in Bradgate Park recently.  On their website it says…..

“Incidents have included parents filming children chasing the deer, dogs chasing the deer, fights between dogs, dogs bothering people, mountain bikers riding off permitted paths, as well as dogs killing wild birds.  In addition dog poo bags have been left hanging in trees and vandalism recently occurred over night in areas where the Trust’s rangers have been improving habitats and facilities”

Reading this made me extremely sad and I am amazed that people think that it is acceptable to treat the park and it’s wildlife in this way!

The ranger that took us around the park this week together with the dog trainer, told us that the number of deer calves is significantly reduced due to this, which is terrible. 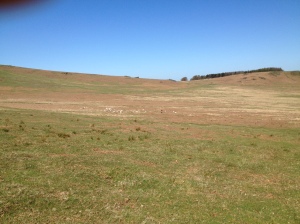 Deer in the distance lying down

As I have said previously there are lots of places on our doorstep that we walk past frequently without even noticing how beautiful they are, or how they change in the different seasons.

This week I visited Castle Gardens, which is just five minutes from the clock tower in the city centre and I was amazed at how beautiful it was….again Leicester City Council should be very proud of their parks department: 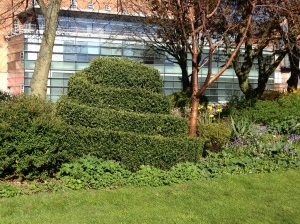 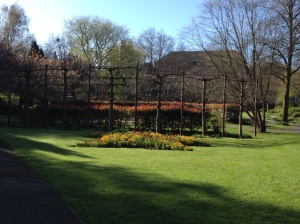 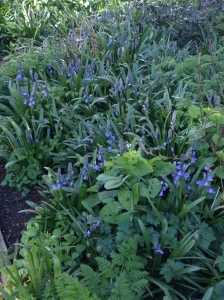 Everyone that walked past me seemed to be in a rush missing the beauty I was seeing.  Some walked along talking on the phone and others were listening to music through their headphones….I think this was such a shame as they were missing the wonderful birdsong that I could hear.

I honestly believe that when people sit at the ‘pearly gates’ they won’t be wishing that they had worked more, rushed more or spent more money on material things…..I think they will be wishing they had slowed down more and enjoyed the things that life can offer for free.

This Week In My Garden:

This week I have been planting my potatoes.  I have planted my usual ‘Marfona’ which are white second earlies and ‘Desiree’ which are a red late main crop.

Over the years I have tried lots of different ways of planting potatoes, but I have found that speading manure / compost over the bed in winter and then digging a trench and using a bulb planter when planting the potatoes works the best for me.  This way I can plant them deep and I only usually have to earth them up once. 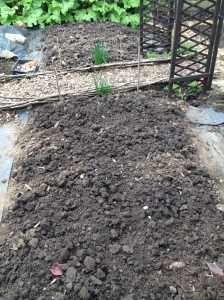 Amazingly, as I was digging my trenches I still found lots of rubble (though I dug the beds well last year) and I even found a big blue brick! 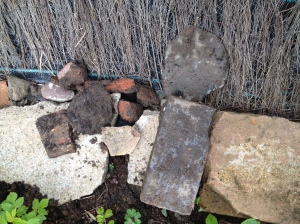 This week my parsnips germinated.  As soon as the seed leaves appeared above the compost in the kitchen rolls, I moved them outside into my mini greehouse for a few days.

I then made holes in the ground that were deep enough for the kitchen rolls.  I did this by banging an old piece of guttering pipe into the ground and then planted the kitchen roll into it, making sure there were no gaps between the soil. 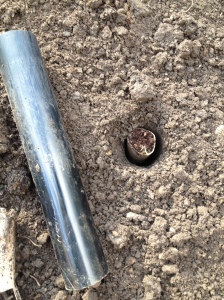 I then watered them to settle the soil around the tubes making sure there wasn’t any of the cardboard tubes showing above the soil (as this acts like a wick and dries the compost out in the kitchen roll).

Then I put mini-cloches made out of ‘pop’ bottles over them to give a bit of protection from the weather and slugs (I use old sticks inserted into the bottles to stop them from blowing away):

This week I have also been planting my climbing peas.  They are a variety called ‘Peashooter’ which I have been growing for quite a few years now.

As with all my crops, I  raked in some blood fish and bone a couple of weeks before.

I put up some pea and bean netting using canes and planted the peas.  Last year I grew my peas facing east to west, however the peas at the back didn’t do so well due to the shade from the peas in front, so this year I am growing them facing south to north in the hope they will do better:

I have given the peas a bit of protection from the weather and birds using old panes of glass that I brought back from my allotment when I gave it up.

You can also see in the photo below that I put weed suppressant in between the peas so it helps to cut down the weeding, where it is awkward to hoe: 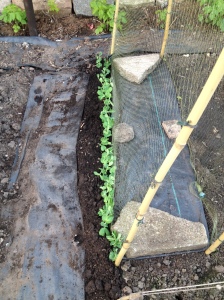 I have continues to deadhead my daffodils this week and nearly all of them have finished flowering for another year, which is sad as they are my favourite flowers….however there is so much more to look forward to in the garden now the weather is warming up.

We have eaten our first ‘cut and come again’ salads in my greenhouse and today I have noticed that my first radish of the year are ready to eat: 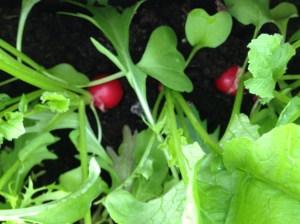 And the ‘lollo rossa’ lettuce which is growing under glass outside is ready for me to pick the odd few leaves to add to our salads. 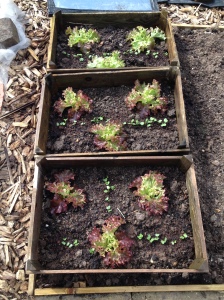 Also the chives I brought back from my allotment in January 2015 are doing brilliantly sitting along my main path and I am picking them to add to every salad we have:

Also the rhubarb I transplanted from my allotment in Jauary 2015 is also doing well.  I will be picking it sparingly this year so each plant builds up it’s roots system ready for normal harvesting from next year. 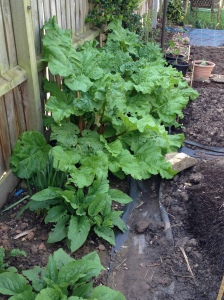 It’s taken me over a year to get used to my small kitchen garden instead of my four allotments.  Finally I am beginning to enjoy working in it, instead of constantly thinking about what I would have been doing at my allotment.

I have had moments during this month where I can honestly say it has been sheer bliss working in my garden, whilst Judy (my dog) has basked quietly in the sun.  One big advantage is I can nip out when I have five minuites to spare and finish a job, deadhead, weed etc. and if I want I can stay out until the sun goes down and the moon shines….. and once again I have felt happy to be alive in my garden, which is how I used to feel at my allotment!

Thank you for reading my blog today.  I will be back next Friday as usual.

Have a great week!