It has rained every day this week and at times I have been really wet whilst working at my allotment.  The soil is too wet and soggy to stand on now, as it would ruin the soil structure.  So I have chosen to do jobs that do not require me to stand on the soil.

As a general rule of thumb, if the soil sticks to your boots, then it is too wet to work on.

In between the showers there has been some beautiful rainbows:

My first allotment job this week was to complete my runner bean trench.  I dug it out two or three weeks ago and have been filling it with old peelings, etc. since then:

And as both trenches were full, I covered the peelings back up with soil so they can decompose ready for the end of May (when I plant my runner beans).  This will help retain the moisture in my soil, which runner beans love.  You can see in the photograph above, I have been standing on a plank of wood so I didn’t need to stand on the soggy, wet soil:

I have also given my ‘comfrey bed’ a tidy up, by removing all the old leaves and putting them onto my compost heap.  I have an enormous comfrey bed as I find it such a useful plant to have at my allotment and it saves me pounds as it makes a wonderful FREE high potash fertiliser.  You can read about how to make ‘comfrey tea’ here.

I also use comfrey by adding the leaves to my compost bins as the leaves are a great ‘compost activator’ and if I have any spare, I add them as a mulch around my potatoes, which I just dig into the soil after I have dug my potatoes up.

If you are thinking of buying comfrey plants, then the books will tell you to buy a variety called ‘Bocking 14’ which doesn’t produce seed.  I ignored their advice and just dug up a plant on my neighbours plot (that they said they didn’t want) and took lots of root cuttings from it.  As long as you ensure that you cut the plants down before they flower, then you won’t have a problem with it self seeding. 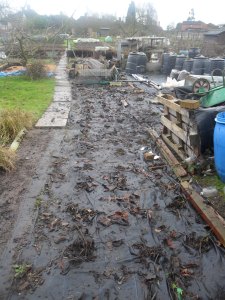 I have also given my blackberries a major prune, as there was loads of dead wood that needed removing and I also wanted to clear away the canes at the front of the bushes, so I can start to work on this area:

Blackberries fruit on the previous years growth, so I pruned away the old canes and tied in the new growth.  It looks a bit drastic in the photo below.  It will be interesting to see how many blackberries I actually get this year now, but I do know the pruning will have done the blackberries good in the long run.

I have also been pruning my apple and pear trees this week (it is important you don’t prune plum or cherry trees in the winter).

Unfortunately I have been having a problem with my shoulder (since slabbing in the autumn), so I have had to prune just one tree a day. 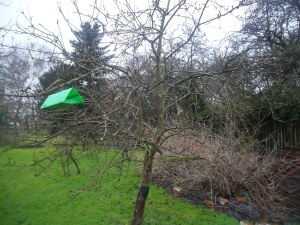 Pruning isn’t difficult, yet people seem to think that it is.  All you are doing is firstly removing any damaged or diseased branches and then any branches that are crossed, so they don’t rub together and cause disease:

Then you need to remove any ‘watershoots’, which are ‘whip-like’ twigs that grow vertical (usually from a wound site).  These are not productive and divert energy away from the tree’s real job of producing fruit and while they are there, they are decreasing air circulation within the tree.

After this, you are aiming to open the centre of the tree up, to produce a ‘goblet’ shape so the air can circulate, again to prevent desease.  Make sure you don’t overprune….only prune away upto a quarter of the branches.  If you get into the habit of pruning every year, then your tree won’t need too much taken off each time you prune.

I use my loppers and my long handled pruners when pruning my trees.  The long handled pruners were a birthday present from my daughters a couple of years ago and they have been brilliant.  They were recommended to me by my tutor at Horticultural college.  He said they were as good as the expensive pruners that you can buy.  I seem to remember they cost approx. £15 to buy from Wilkinsons.

The pruners extend to twice the height that you can see in the photo above.

and before you begin pruning your own trees, the RHS have some great videos to watch here too.

Back at home this week, I have been trying to think of a place to put the seeds I have sown.  I like to keep my seeds inside my house for as long as possible, so I don’t have the expense of using my electric greenhouse heater until I really have to.  Unfortunately, now we have french doors, I have lost the great big windowsill I used to have that was so great for keeping my seeds on.

After a few discussions with Mr Thrift, I decided to bring in an old ‘mini greenhouse (without the cover) and buy a growbag tray to stand my seed trays in:

So this week, I have sown some white and red onions, some more broad beans and some peppers and coriander.

I have had to move our kitchen table back a bit, but as I always say… 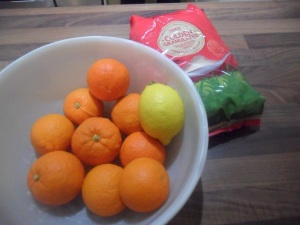 Finally, I bought 2lbs of seville oranges from the market last saturday for £1.40.  So I decided to make some orange marmalade.  I have never made marmalade before (because I have never liked it), but I thought it would be nice to put in my Christmas hampers (I like to think ahead).

I followed Delia’s recipe here and I’ve got to say I am very impressed.  Even I enjoyed it on my toast this morning!

The recipe made me five and a half jars of tasty marmalade, which I will now store in my pantry (except the half jar which I am eating). 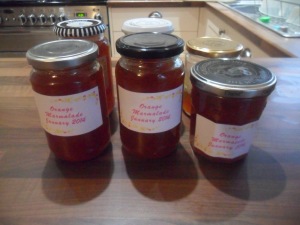 I worked out that the jars cost me approximately 80p each to make, which is more expensive than the cheaper shop bought varieties (which I have obviously only eaten and didn’t like before) but less expensive than the higher quality brands.

Providing my family enjoy it when I give it to them, I will definately be making it again. 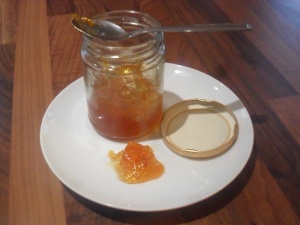 I will be back on Monday at my usual time.