For those that don’t know, we brought her home from the RSPCA in October and it was evident after a few weeks that she was a very anxious dog.  By December she was so frightened of other dogs sniffing around her that she actually bit a dog….I was mortified at the time.

We then contacted a behaviourist who has been working with me since December and after six weeks of training Judy, she was ‘tolerating’ other dogs a lot better…..until a couple of weeks ago two separate dogs within two days would not leave Judy alone and eventually she reacted badly to them (thank goodness she was wearing a muzzle).  On both occaisions their owners ‘ambled’ slowly across to me oblivious that their dogs were causing Judy a problem (even though I had shouted across to them to ask them to call their dogs away).

So we are now back to square one and Judy cannot tolerate any dogs again.  So I have been walking her at quiet times around the streets instead of the park to bring her stress levels down, however this has had a knock on effect….poor Judy has been getting more and more stressed with the buses, lorries, motorbikes, people with hats on, or people with walking sticks, prams, etc.

On Monday she even got upset at some new road works on a quiet side street and just would not walk past them and I nearly had to ring Mr Thrift to come out of work to pick us up in the car and take us home!

At home she is now continually pacing around our kitchen table during the day and running up and down the garden over and over again, without stopping.  In fact the only time she settles is when I hold her next to me, or in the evening when our curtains are tightly closed and everywhere is quiet.

So I emailed our behaviourist and she suggested we gave medication a try from the vets….so this is what we have done.

I feel that I have tried so hard to train her without success and I have used plug in diffusers, collars and things to calm her in her food and nothing is now working.  It really isn’t fair on her to live this way, so I feel this is now the only option.  I am hoping that the tablets are just for the short term and the vet hopes this too, but the vet also said that some dogs do need to take them long term….let’s hope not.

The medication can take upto two months to fully work, so I will let you know if things improve.

In between my problems with Judy this week, I have been working hard to finish freezing the crops I brought home from my allotment before I gave the plots up.

I have now frozen my celeriac, brussells and some of my parsnips: 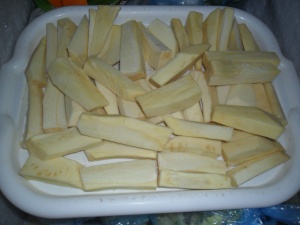 I do still have quite a few parsnips left to freeze though, but I will do them in the next few days:

In my new kitchen garden I have been making a new path to follow my washing line.  I know some of you may think this is strange, but I do like to hang my washing out even in winter, as it saves money when I don’t use the tumble dryer and I think things seem so much fresher when they have dried in the wind.

I started by using a couple of the weed suppressant paths that I made for my allotment last year (you can read how I made them here).  I then used bundles of ‘hazel’ tied together with wire, to line the path.  This is hazel that I grew at my allotment and brought it home when I knew I was giving the allotment plots up.

I then finished it with wood chip that I had also salvaged from my allotment, though I am yet to finish the end of the path nearest the fence, as I am not sure if I want to go all the way down to it yet as I haven’t finished planning the garden.

I am pleased with how it looks so far: 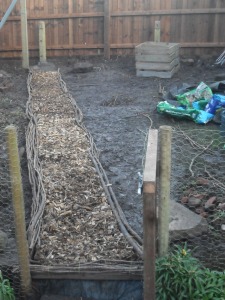 I have also been replanting the fruit bushes and autumn raspberries that I brought back from the allotment.  When I first brought them home I just ‘heeled’ them in as I hadn’t prepared the ground at that stage:

I have now planted the fruit bushes and the raspberries, making sure I prepared the ground first by removing any weeds and adding a lot of compost to it.

I have lined our wire fence with the raspberries and our other ‘chicken wire’ fence with the two blackcurrant bushes, a white currant bush and a gooseberry plant.  These were fruit bushes that I only bought from a nursery in September, so I didn’t feel guilty about bringing them home from my allotment and I also have left plenty of autumn raspberries at my plot for whoever takes over.

I have also laid a couple more weed suppressant paths so I can get to pick the fruit (eventually) without treading on the soil:

So my kitchen garden is beginning to take shape…..it looks a lot different from the ‘before’ photo on the left: 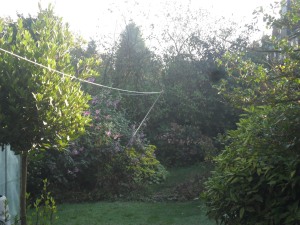 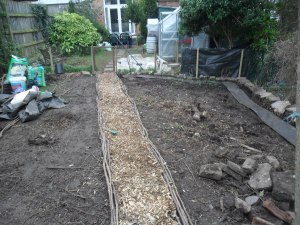 I have also decided to put the big metal pots that I also brought back from the allotment, outside our back door.  I will fill them when I get around to it, though for the moment I have now stuffed them with some of the nets I also brought back.  I’m not sure what I will be planting in them yet….I must finish planning my new garden! 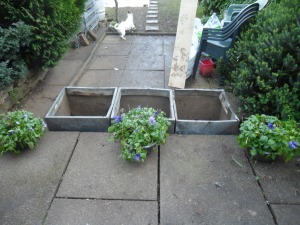 Last weekend I managed to finally buy some seed potatoes.  It was very, very strange just buying a few instead of the big bag I usually buy each January for my allotment.

I chose a few ‘marfona’ seed potatoes (a 2nd early which I particularly like) and some ‘desiree’ potatoes (which are a reliable red skinned main crop variety).

They are all chitting nicely in our bedroom as this is the coolest room in the house, next to my remaining butternut squashes……how romantic we are!

Yesterday I finally got around to sowing my leeks and broad beans.  I should really have done this last month, but I’m sure they will catch up.  The leeks are a variety called ‘Lyon 2’, which I haven’t tried before (I got the seeds cheap in the autumn) and the broad beans are an overwintering variety called ‘Aquadulce’ that should really be sown by the end of January.

I have sown plenty of seeds so I can take a few plants to my mother-in-law this year, for her garden.

The seed trays are sitting nicely in my cold greenhouse now: 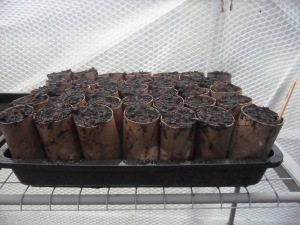 To finish off with, it was my eldest daughters seventeenth birthday yesterday (where does time go to).  She asked for a ‘chocolate indulgient cake’ i.e. a cake with her favourite chocolate sweets on.

I baked a three layer cake using my usual ‘throw it all in‘ recipe and covered it with a chocolate buttercream frosting and used kit kat sticks, maltesers and chocolate orange to decorate it.  I think a little imagination goes a long way….and she seemed to really like it: 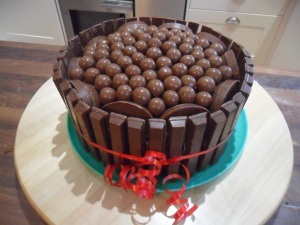 Anyway, that’s enough for this week.  Thank you for reading my blog today.

I will be back as normal next Friday.

Have a lovely weekend!

30 thoughts on “My Problem Dog & My New Kitchen Garden….”