Don’t forget I will be back on Monday 24th February.

I did my romantic bit today and gave Mr Thrift some homemade shortbread hearts.  Shortbread is Mr Thrift’s favourite biscuit and they are so easy to make and taste really good too.  The recipe I used is here.  I just ‘poshed’ them up by using a heart cutter and sandwiched them together with buttter icing and jam to make them a bit more special.

Well it’s been another wet and windy week, but I am grateful to say that we haven’t been suffering from floods as some parts of the country have been.  I really feel for the people affected.

In between the rain this week, I did manage to get down to my allotment a few times and finish off the area outside my polytunnel.  This is the area I began to write about on Monday, that I have been working on for the last few months between other jobs.

Just in case you haven’t seen my blog post on Monday, I took on plot number four in January 2012: 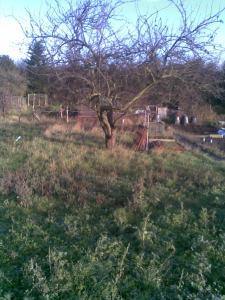 The area outside of my polytunnel had bugged me since I took on the plot, but I had concentrated on other areas of plot number four first.

The area was made up of a mixture of crazy paving, mowed couch grass, slabs (of different shapes and sizes) and little round pebbles which I have slipped on at various times, nearly injuring myself.  This area was also plagued with ‘horsetail’ (Equisetum arvense), which is really hard to eradicate.

January 2012 after strimming the weeds and grass.

At first I put my cold frame in this area, as I didn’t know what else to do here, but I found that this made it even harder to weed between the slabs, as my seed trays were in the way.

So after two years of weeding between the slabs and crazy paving and weekly sessions of strimming the couch grass, I decided enough was enough and it was time to do something about this area.

I started in Autumn by lifting the slabs and crazy paving (which is when I strained a ligament).  Most of the slabs were normal sized slabs, but one of them was enormous.  You can see it in the photograph below in front of the two blue waterbutts on the top right hand side.  I haven’t got a clue how it got there.  My brother-in-law managed to move this slab for me as I would never of managed it on my own.  He also re-laid the row of slabs directly outside my polytunnel afterwards too, which I was very grateful for.

I used some of the slabs to widen the path near to my blackberries: 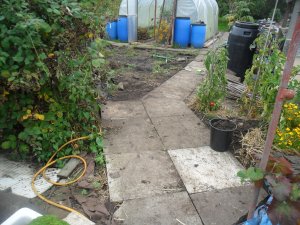 And Mr Thrift helped me to lay another row of slabs outside of my polytunnel, so it would be easier to get my wheelbarrow into it. 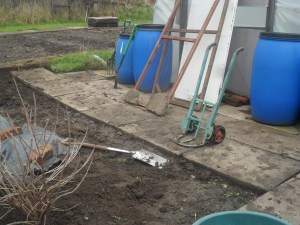 I also dug up all the couch grass.

I then cut back my blackberries as they were becoming overgrown.

You can see from the photo above that I had a piece of weed suppressant underneath the blackberries, which was held down with some old bits of wood.  I decided I needed to neaten around my blackberries too, so I did this with wood that I had sitting around my plot. 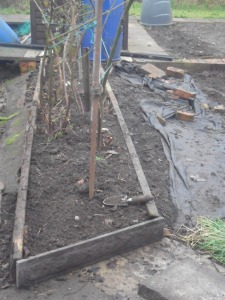 The area next to my blackberries used to be an old ‘dyke’ that dried up many years ago.  Occaisionally when we have excessive amounts of rain in one go, then the ‘dyke’ runs again as you can see in the photo below, taken in November 2012:

I decided to lift all the old carpet that was in the dyke and replaced it with weed suppressant.  The carpet shouldn’t really have been there as it is banned from our allotment site due to the chemicals it can contain.

I am now planning to grow some plants through the weeds suppressant, when I get around to it, to pretty the area up. 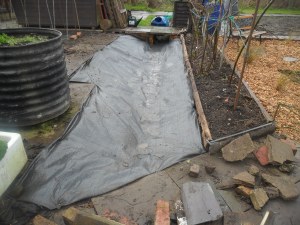 I had spent many hours wondering what to do with the area outside my polytunnel, now that it was cleared.  I have quite enough growing space on my other three plots for all the vegetables I want to grow, so I didn’t really want to use this space for that and after all, as I said previously, this area was plagued with weeds, especially ‘horsetail’.  I also thought about planting a tree here, but I didn’t want to shade my polytunnel either….

I mentioned on Monday that plot number four was turning into my ‘pleasure plot’, as here I have my wildflower area, my woodland area, my dad’s area, my polytunnel and my fruit tree area.  So after lots of thought I decided to have a ‘peaceful’ area, where I can have my lunch or just sit and relax when I am tired.

Then I laid wood chippings over the area

I split and transplanted grasses from my other plot and added some stepping stones.  I also made a low fence all around the area made with prunings from my apple trees:

Finally I moved my old bench from behind my polytunnel to finish it all off and I am really pleased with the result:

I am really looking forward to sitting in this area.

Next week is half term for my daughters, so I will be taking a week off blogging to spend some quality time with them.

So I will be back on Monday 24th February

Parsnips, celeriac, cabbage and swede from my allotment this week.

Just before I go, I thought I would share something with you.  It was my eldest daughters 16th birthday this week.  I can’t quite believe that I’ve a sixteen year old daughter…the years have flown by.  She has turned into a beautiful, caring young lady who I love spending time with.

Just in case you are wondering, the hearts all say ‘1D’ which is short for ‘One Direction’:

Don’t forget I will be back on Monday 24th February.