Yesterday I wrote about making mincemeat for mince pies.

Mince pies are traditionally eaten at Christmas time and children leave one for Santa at the foot of the chimney on Christmas Eve.

There are other traditions and superstitions that I have to admit I hadn’t heard of, until I did some research for my blog:

At the weekend I made my mince pies, this is how I make them: 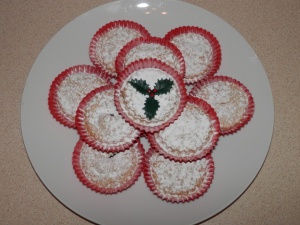 Icing sugar to dust the pies

Put all the ingredients in a bowl.

Rub the margarine into the flour using your fingers and thumbs, until it resembles breadcrumbs.

Add a little bit of water and mix with a round bladed knife.  Keep adding the water a little bit at a time and mixing until it begins to stick together.

Then use your hands to form a ball.

Put some flour on your clean work surface and begin to roll the pastry.  Every so often turn your pastry to make sure it doesn’t stick to your surface.

When you pastry is approx. 5mm thick, cut rounds using a pastry cutter.

Put each ‘round’ into a pastry case.

Put a teaspoon of your mincemeat into the pastry cases.

Cut a cross in the top of each pie.

Leave to cool on a baking tray and then dust with icing sugar.

The mince pies freeze really well and only take half an hour to defrost if you have unexpected guests.

Thank you for reading my blog today